27 years ago I met a woman in a bar. No, not my wife. Her sister. She was tending bar in Tacoma when I stopped in for some beers. It was my first day back to the states after being overseas in Japan for a few years.  I was taking a few days R&R on my way to Survival Training and then Air Combat School. Since it was a slow night, the bartender and I talked on and off for hours. As I was getting ready to leave, she said, You leaving already, thought you’d be here for a while longer, you should stay. At my hesitation, she popped open a beer, put it on the bar and said, This one’s on me. 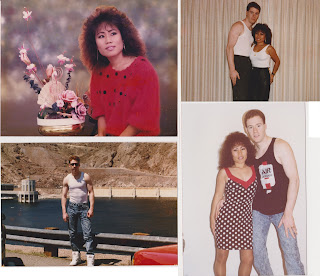 It’d been a long flight, a long day, but I sat back down. I knew she wasn’t interested in me. She was a newlywed with a baby at home. As I started drinking the beer, she said, You see, I called my sister over an hour ago and told her she had to come here to meet you, then I called her a few minutes ago and told her if she wasn’t here soon, I wasn’t going to speak to her for a week. That answered my immediate question but only created more. I was about to ask why she wanted her sister and I to meet, but the answer was obvious. Some sort of blind date or something. I hated blind dates/fix ups.

The bartender saw my hesitation, said, Trust me, you want to stay, you two were meant for each other. Things got a little awkward between us after that because I was thinking how could she possibly know that or anything else about me. She’d only known me for a few hours, and I wasn’t that interesting. But the question answered itself almost immediately when the most naturally beautiful woman I’d ever seen entered. She lit up the room, turned every head, in nothing more than faded blue jeans and an old t-shirt.

From the first glance between us, there was a connection. I felt it and I was sure she did as well. It was electric. Within ten minutes, I knew she would either irreparably break my heart or be the love of my life. She was smart, funny, sexy, and refined. Sitting beside her at the bar, I couldn’t look away from her gaze. There was something in her eyes that I saw in my own eyes every time I looked in the mirror. It was perhaps a longing, perhaps something else.

We talked until closing. At the end of the night, we exchanged numbers. This was before cell phones, so this was the number to her sister’s place and my room at billeting. I asked her if she wanted to go to Seattle with me the next day as I was going to do some sightseeing before I went on to training. She said she couldn’t go, would call me, that we should try to meet the next evening before I left for Spokane.

I didn’t expect to see her the next evening, or possibly ever again, so I was crestfallen when we parted ways. The next day was agony. By luck or chance, I had just returned to my billet when a call came in. It was her. She asked what plans I had for the evening. I didn’t have any and we decided to meet.

I took her to dinner and dancing. Her sister and friends chaperoned later when we went for drinks afterward. We parted ways with nothing more than a kiss, but it was like a lightning strike. I knew I was falling in love with her, and she with me.

When I went to Survival Training in Spokane, she visited a few times and I drove to visit her in Tacoma a few times. At the end of those few short weeks, I asked her to come with me to Air Combat School in Arizona and be my wife. For her it meant leaving everything and everyone behind. It also meant having to move with me to Germany a few months later. She said yes without hesitation. She’s been my wife and best friend ever since.

The chemistry and electricity between us have never faded. She’s the one person I can’t wait to see when I open my eyes in the morning; the last person I want to see when I close my eyes in the evening. She’s the one person I talk to for hours every day about everything and nothing at all. She’s my heart, my compass, my North. The person whose hand I can’t wait to feel in mine.

My only regret in 27 years of marriage is that I haven’t asked her to marry me again. This is something I plan to do.
at June 02, 2016