Tragedy, Hope and New Beginnings: A Story That’s Not in My Military Memoir Stormjammers But Perhaps Should Be in My Next 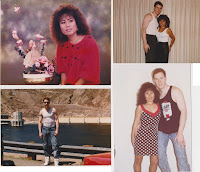 My wife’s second miscarriage was a clue that something was terribly wrong. I thought it was the stress of being a combat flyer’s wife, constant deployments, or the subsequent ever-changing schedule when I worked inside the secretive underground facility known as the Tunnel. I never imagined that it was due to the air we breathed, the water we drank or the soil beneath our feet, but it likely was as lead from lead-based paints had leached into the soil we used for gardening and other toxic substances were throughout our base housing and the places we worked.

No one tells you when you join the military you’re risking not just your life but your health—and that of your family and even your unborn children. As Newsweek said in its July 25, 2014 cover story, the US Military is supposed to protect the country’s citizens and soldiers and not poison them.

Throughout the United States, there are 141 military bases and related Department of Defense facilities on the Environmental Protection Agency’s superfund list and the National Priorities List for cleanup—and that list of 141 isn’t all inclusive by any means. It is simply a list of the worst of the worst, bases and facilities with toxic contamination so bad that the EPA has assigned them its highest priority for cleanup due to unacceptable risks to human health.

Many of the worst facilities are closed or closing. However, it’s not like the toxins in the soil and ground water are going to stay where they are. They’re going to continue to pollute and contaminate adjacent facilities until they are cleaned up once and for all. What’s waiting beyond the 141 highly toxic bases and facilities? Well, the Department of Defense has identified 39,000 contaminated locations so far, from areas as small as a building to as large as an airfield, and those locations are spread across many of the 4,127 DOD installations located in the United States.

All those years ago, I didn’t know about these issues or that toxins were possibly changing my life and my family, but I guessed there was something going on beyond stress. I started asking questions, and a healthcare worker who treated my wife suggested I look at environmental factors in our home and workplaces.

In our pre-World War II base housing, lead paint often was prevalent and possibly other toxic substances. We dug up the garden which was alongside the house, stopped drinking the tap water, and made other changes. With these changes, our overall health seemed to improve. Months later, my wife got pregnant again and this time, she carried the pregnancy well and my son, Will, was born.

Will arrived a few weeks early, but healthy. For us, it was a new beginning and a hope for the future of our family.